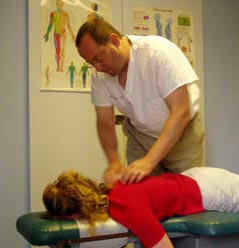 While attending chiropractic college, he worked as an x-ray technician for a chiropractor. Six months after graduation he opened up his Lafayette Hill, PA office. Originally from Philadelphia, Dr. Rubenstein now resides in Collegeville, PA, with his wife Irene, and children Lea and Dean.

Dr. Rubenstein was named the school Chiropractor for Eastern University and Palmer Theological Seminary in June, 2011.

Spending five years as an accountant after graduation from Drexel, Dr., Rubenstein developed back problems and was helped by a chiropractor who laid the foundation for his chiropractic career. He was also influenced by a close friend, a retired podiatrist, whose three sons are chiropractors.